The Mindset of the Trader

I think anything is possible if you have the mindset
and the will and desire to do it and put the time in.
Roger Clemens

Way back in the 1960's and 1970's one decision stocks became a popular way to invest. A one decision stock is one you buy and hold on to forever. Along with this philosophy a select group of stocks became known as "The Nifty Fifty". Fifty stocks that were the ultimate one decision stocks; like IBM and GM. If you talk with some people who invested back then you'll sometimes hear them say: "I learned my lesson a long time ago. I put my money in the markets and lost it; Never again!"

They searched for "undervalued" stocks, purchased shares, held them, and waited for them to increase in value. Sometimes it worked, often it didn't. The buy-and-hold strategy often misleads investors. The markets don't go in one direction forever, whether the trend is bullish or bearish. Only by anticipating the twists and turns of the market can you make "significant" profits. If you are striving to become a profitable trader, you must cast aside the buy-and-hold mindset of the long-term investor, and learn to think like a trader.

The buy-and-hold strategy is still viewed as a viable trading strategy even in many business schools. Even in the wild 1990's fortunes were lost when the dot-com bubble burst, by people subscribing to that buy-and-hold strategy. Please note I am not addressing time frame. Had you purchased some of the dot-com stocks in 1995 let's say and sold them in 1998 or 1999 or even 2000, you still traded them. Your time frame just encompasses a much longer time frame than the very short-term trader.

Whether you trade based on technical analysis or prefer fundamental analysis you must try to assess the potential for that company. Are they still growing profits? Does the company have new and exciting ideas they are or will be bringing to market? 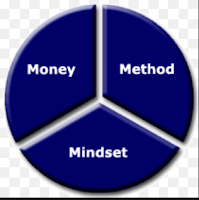 We never know for sure what the future holds. Who could have known five years ago the energy crisis was coming relatively soon and what that crisis would do to our domestic auto companies? It's difficult at best to make these forecasts.

Stock prices do reflect the companies' fundamentals most often; however they also reflect market participants perceived notion of what the future holds. Did your holding just report horrible earnings and a not so great outlook? Did their stock price decline? No! Market participants are probably now looking to changing conditions in the not to distant future, hence buying appears in the face of seemingly bad news. Don't be confused by it, listen to the market.

It may be hard to accept at first, but trading requires you to accept risk and uncertainty. It may take time and experience to accept, and you may get hurt along the way, but after a little while, you'll be able to accept uncertainty, and thrive on it.

Posted by PrudentTrader.com at 9:25 AM