You must take personal responsibility. You cannot change the circumstances, the seasons, or the wind, but you can change yourself. That is something you have charge of.
Jim Rohn

An attribute most successful people, as well as successful traders share, is simply, no matter what happens they take personal responsibility. They operate on the belief that they create their world. The phrase you’ll most often hear from these successful people is: “I am responsible, I’ll take care of it.”
Most of you, I am sure at one time or another, have purchased a stock based upon the recommendation of a stockbroker, a friend, or investment newsletter. I am also sure, that like myself, sometimes those ideas do not work out and result in a loss, sometimes a substantial loss. Most stockbroker’s and investment newsletter writers are honest, hardworking individuals, and are telling you what they honestly believe to be an outstanding investment idea or trade, at least at the time.
The one, however, who has the ultimate responsibility is you. You bought into the argument or 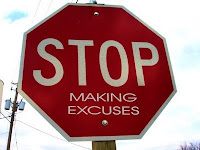 concept; you bear the responsibility, regardless of the results. No one held a gun to your head and said buy or sell. The position you are in, you created, if not by your physical actions, maybe by the level and tenor of your thoughts (fear, greed, etc.).
If you don’t believe that you’re creating your world, whether it be successes or failures, then you are at the mercy of circumstances. Things just happen to you. You’re an object, not a subject. If that is what you believe, its time to look for another culture, another world. Why be here if you’re just the product of random outside forces?
Taking responsibility is one of the best measures of a person’s maturity. It’s also an example of beliefs supporting other beliefs, a coherent system of beliefs. If you take responsibility, you are in control, and if you are in control, you will succeed.


“Those who take responsibility are in power. Those who avoid it are disempowered” – Anthony Robbins.

Dan Rather once said John F. Kennedy became a true leader during the Bay of Pigs incident, when he stood before the American people and said that the Bay of Pigs was an atrocity that should never have happened, and then took full responsibility for it. When he did that, he was transformed from an able young politician, to a real leader.
By retaining responsibility, you retain the power to change the result you produce. The next time you have a bad trade, take personal responsibility for it, and learn from it. Avoid at all costs blame.  It’s not a failure, it’s a learning experience, it’s feedback.
Reprint from PrudentTrader archives
Posted by PrudentTrader.com at 9:59 AM